All incidents and accidents (including occurrences of near-miss) are preceded by unsafe acts and/or unsafe conditions. The fact that an incident happened nearly always means that something went wrong in the Work Health and Safety Management System (WHSMS). In events leading up to the incident, there will be several factors that always have design, environmental, behavioural and managerial supervisory components which may have caused or contributed to the incident taking place.

As such, as per legislative requirements, organisations need to establish a system of recording and investigating workplace incidents (whether they result in injury / lost time), damage, near-miss and diseases to prevent or reduce the occurrence of these in the future.

The Australian Standard AS/NZS 4801:2001, section 4.5.2 Incident investigation, Corrective and Preventive Action states that the organization shall establish, implement and maintain procedures for:

(a) investigating, responding to, and taking action to minimize any harm caused from, incidents;

(b) investigating and responding to system failures; and

The organization shall implement and record any changes in the OHSMS procedures resulting from incident investigations and corrective and preventive action.

Measuring injury statistics is a valuable tool for organisations in reducing injury and illness at the workplace. The recorded statistical data provides recorded evidence on how an organisation safety performance is tracking as the data directly relates to the rate of injury or incidents reported. Refer to the AS/NZS Standard 1885 – Workplace injury and disease recording standard for guidance. This standard is available from providers such as SAI Global.

Duty to notify of notifiable incidents

Incident notification and investigation procedures for organisations (and PCBU’s), need to reflect statutory notification requirements too, if required. For example, refer to section 38 of the WHS Act 2011, Section, which states:

(b)  a serious injury or illness of a person, or

(a)  immediate treatment as an in-patient in a hospital, or

(b)  immediate treatment for:

(i)  the amputation of any part of his or her body, or

(ii)  a serious head injury, or

(iii)  a serious eye injury, or

(v)  the separation of his or her skin from an underlying tissue (such as degloving or scalping), or

(vii)  the loss of a bodily function, or

(c)  medical treatment within 48 hours of exposure to a substance, and includes any other injury or illness prescribed by the regulations but does not include an illness or injury of a prescribed kind.

What is a “dangerous incident”? A dangerous incident means an incident in relation to a workplace that exposes a worker or any other person to a serious risk to a person’s health or safety emanating from an immediate or imminent exposure to:

(a)  an uncontrolled escape, spillage or leakage of a substance, or

(b)  an uncontrolled implosion, explosion or fire, or

(c)  an uncontrolled escape of gas or steam, or

(d)  an uncontrolled escape of a pressurised substance, or

(f)  the fall or release from a height of any plant, substance or thing, or

(g)  the collapse, overturning, failure or malfunction of, or damage to, any plant that is required to be authorised for use in accordance with the regulations, or

(h)  the collapse or partial collapse of a structure, or

(j)  the inrush of water, mud or gas in workings, in an underground excavation or tunnel, or

(k)  the interruption of the main system of ventilation in an underground excavation or tunnel, or

(l)  any other event prescribed by the regulations.

WHAT TO DO WHEN AN INCIDENT HAS BEEN REPORTED BY A WORKER OR OTHER MEANS.

Investigate it as per the company’s incident reporting process. If required, report it to applicable regulators as defined in section 38 of the WHS Act – Duty to notify of notifiable incidents.

There is a wide range of incident seriousness, so incident investigation procedures should be flexible and easy to follow. A near miss with no injuries, time loss damage or serious potential outcomes may not require a time-consuming and detailed investigation. But, nevertheless, such incidents may warrant some level of investigation.

Factors in incidents can involve several causative elements – not just one thing! There are usually 4 factors which should be considered when investigating incidents. These factors may include:

A thorough investigation of an incident will usually identify a gap in any-one of the above factors which has contributed to the incident occurring. Human factor input usually is the main reason of incidents occurring. It is good workplace practice and an essential element of effective WHS to record the details of all work-related incidents (even minor incidents). It is also crucial to investigate every incident. The outcome of the investigation should be recorded and filed with the incident report. The initial incident report, together with the results of subsequent investigation, will form the basis of the preventative action that will be taken to ensure that the incident does not recur in the workplace. 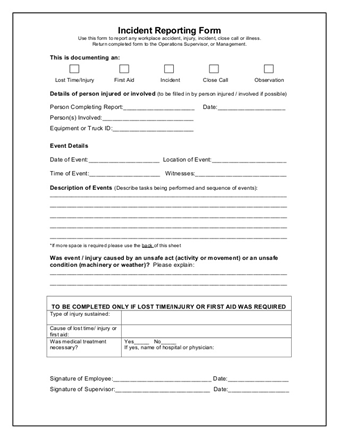